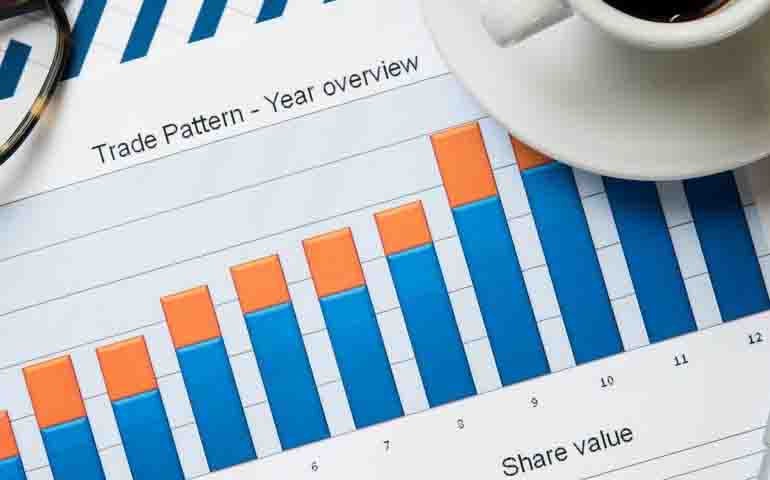 The investing community uses the market cap to classify companies and analyze their relative sizes in a certain industry or sector. What is market capitalization in stock exchange? It is the total market value of all issued shares of a company. This indicator is used to determine the size of a company and is an alternative to indicators such as revenue and asset size. It is calculated by multiplying the amount of shares of a company in circulation and by the market price of one share. The basis of the formula for calculating the market capitalization is the notion that only a free market can determine the true value of a company since the value of shares reacts sensitively to all economic, technological and political factors that determine supply and demand in the market, changes in the market situation, internal potential of the company. The formula is:

Initially, companies were classified large-cap, mid-cap and small-cap. Small capitalization - this indicator refers to emerging firms of small size. Investing in shares of these companies is as promising as it is risky: on the one hand, investors are attracted to the opportunity to buy shares at the lowest price so that in a few years they can sell them at a significantly higher price; on the other hand, there are no guarantees that a young company will exist in several years. New players go out of business more frequently than companies with an established brand. An investor should risk only during periods of economic growth – investing in a company with a low capitalization when there is a crisis is money down the drain. Investing in companies with low capitalization has other negative aspects: shares are illiquid so if you wish to sell them in the future, you may face difficulties in finding a buyer; shares bring minimum dividends because a young company invests profits in their own development.

Mid-cap - such firms are a kind of compromise for the investor. They have not yet reached the ceiling and can increase their value by attracting new consumers but at the same time are fairly stable as they have sources of financing than firms with small market capitalization do not. In addition, mid-cap companies are easy for investment analysis and act a way to diversify risk. However, organizations with medium capitalization have disadvantages: for example, despite the advantage of long-term growth compared to large firms, they may be stagnant and it is quite difficult for an investor to determine a prospect for growth.

Large capitalization – these are considered the safest form of investment. Dividends are paid on a regular basis even during periods of economic instability as these firms have access to higher-level financing sources than other companies. Large-cap stocks tend to be less volatile and as a result regarded less risky. However, there are also disadvantages: investing in such companies is an excellent way to save your money but not to multiply it. Usually large-cap companies have already peaked and do not show growth perspectives. Large-cap companies have a tendency to ride out in recessions better but they can also perform poorer than small-cap stocks when the economy comes out of a recession.

Later, the terms "mega" -, "micro" - and "nano-capitalized" appeared. But there is no clear gradation. The boundaries of transitioning from one level to another are not expressed in absolute values but in percentages. Absolute values are initially not accurate as they are subject to inflation and general market trends. So, the overwhelming capitalization of $1 billion in the middle of the last century is not considered such a big one now. Approximately, the boundaries can be designated as follows:

The size of a company is the main indicator for deciding on the placement of investor's assets and for determining the risk/profit parameter, when buying a company's shares directly or when investing in an investment fund. If the rating agencies did not come up with capitalization, it would be done by investors. After all, they need to know how the company fits among competitors. As for venture funds, there is no general rule. Some invest in only companies of a certain level (for example, in the industry leaders), while others prefer to diversify their assets. The most important thing is not to forget about the pitfalls of this indicator. After all, capitalization is a market valuation of shares. And the sentiment in the market is subject to investors' expectations and not always objective. Also, prices can change under the influence of all sorts of rumors and speculation – the share price fluctuates, capitalization fluctuates.